After her diplomas in set design and teacher obtained at the E.N.S.A.V, La Cambre, Aline Breucker works as a set and costume designer for circus, opera and theater. As a costume designer, she designs and creates the costumes for Hopla Circus in 2004 and for L’Oiseau de feu by Stravinsky, a musical performance created with the Philharmonic Orchestra of Liège. She worked several times with Vincent Lemaire for the set designs of La Favorite, Bouvard and Pecuchet, Don Giovanni or even Aida which were presented at the Zurich Opera, the Mons theatre and the Innsbruck Opera. She works particularly with Vincent Boussard, Tanner Michel and Philippe Sireuil. In 2009, before working in L’Assaut des Cieux, Aline Breucker signs the scenography and costumes of the company Carré Curieux, Cirque Vivant! and the scenography for La Traviata for the Santiago Opera in Chile. In 2010-2011, she spends nearly six months in Burkina Faso where she worked on various projects such as the Pan-African Theatre Festival “The Récréatrales” or the creation of a young audience show “Un Paradis sur terre”.

“My name is Thomas and when I grow up I will be a musician!”
I do not remember having made this statement one day, probably I never did. However, art in any form, has always been my privileged mean of expression.
After hesitating between studying plastic arts, cinema and music, I juggle today between different universes that, for me, are related in one way or another with the urge and the need of transcending language through the arts.

Worthy successor of a family of postal workers, Fabrice Richert has chosen to study at the école supérieure de théâtre du régime d’assurance chômage des intermittents du spectacle. In 2005, supported by his family who tells him “you either study or you are on your own”, Fabrice made a choice that will change his diet! After two grueling half days of rehearsals he created “Jazz ta rue”, a show that will tour in street festivals in France, Navarre but also in Belgium thanks to a series of harassing phone calls, lies and bluffs. Then came the time to have a library card, go to the theater, and especially to found the company “Du grenier au jardin“. He then walks through the door of the theater Passerelle. There he meets a man who gives him a text and tells him: “come back when you know it”. After two months of text deciphering hooked to an illustrated Petit Larousse, he comes back, goes up on stage … he stayed for four years with Michel Bruzat. Of course, in parallel he continues his rich and complete training. He works alongside Monique Perchou (advisor at the Employment Centre) who inspires him for the writing of his first shows. In 2007, he creates “Bradiski” a parody of Nordic circus all in gibberish. The same year, convinced that the speech has no place to be and that only physical insolence could make theater he creates “Lutineries”, releases of beasties on bouncing stilts: burlesque attacks! In 2009 he creates C.R.A.C., a tragi-comic street show still running despite budget cuts allocated to street festivals. In 2011, aware of the poverty of his writings and especially of the cultural sector’s economic reality he creates “les Histoires comme ça” by Rudyard Kipling with 2 actors, few set elements and adaptable to the street, the theatre and the rest . In 2012, he fecund Thomas Dardenne and prepares the delivery of Pryl.

Accordionist musician-actor, he performs with the “Cirque du Trottoire” from 80 to 89 and then with “Corvi” and the “Petit Putsch”  (83,89). In 94, he signs the direction of «La Toison d’Orgue». Since then he has participated in numerous projects combining circus techniques and theatre among which «Zouff !» and «Le principe d’incertitude» for Les Argonautes ; «Ha Ha Ha !» for Okidok ; «Fin de sieste» for Dujoli Circus.

Veera has a degree in Humanities from the University of Turku, Finland (MA, 2006). In 2007 she worked as a production assistant for the international theater festival MasQue 2007 (Helsinki, Finland) and she gained experience in the communication field with the Communications Department of the Ministry of Foreign Affairs of Finland (trainee 2007).
From 2008 to 2009, she worked as a post-production coordinator with the production company Motel Royal Finland. In 2009 she moves to Italy where she coordinates the project FLOP – Creative Space for Clown and Burlesque in Rome. As of September 2011, she is part of the belgian company Hopla Circus as the production manager and booking agent of the show “Face to Fake (Hopla Circus ARENA).” Now based in Brussels, in 2013 she creates Ab Joy Diffusion and is currently working with the companies Lady Cocktail (Belgium), Hopla Circus (Belgium), Cie G.O.N. (Belgium) and Duo Kate ja Pasi (Finland). 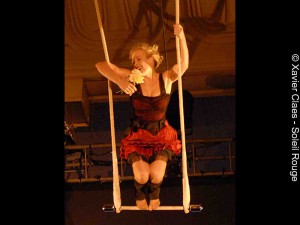 Born on a swinging trapeze on the hillsides of the Diois, Violaine always dreamed of becoming a trapeze artist.  Sports is basically not her thing but she definitely had the feeling for the great swing. At ESAC (2005), she became an aerial acrobat. After a tour in Peru (2008) with the company la Tarumba, and several events with Franco Dragone notably, she was one of the six performers in the show  “Vole et tais-toi” (Fly and shut up) in 2010.

Olivier doesn’t realy like school, so, once he turned 18, he left the school benches and took his chance in life as a stage manager.
Very soon he finds a company that agrees to take him under its wing: Les Baladins du Mirror. With them he will learn the art of the true “handyman” with this travelling theatre. For 8 years he discovers the world of homelessness and becomes familiar with
this environment he so much apprecites now. His route will separate from the one of the Baladins to join the routes of the circus world. He meets Circ’Ombelico company, where he will be part of the creation of “Da-Fort” as a technician. One and a half years touring  in festivals and circus places make him grow a sudden urge to try the Chinese pole! He didn’t wait long before taking the decision to leave the beautiful “Da-Fort” adventure and start a new one …
He contacts Foucauld Falguerolles (chinese pole artist) and asks him if he would agree to train him in the art of chinese pole, knowing he never had any type of training before! Foucauld plays the game and gives him the foundation for a self-taught path guided by his wise advices. For three years, Olivier tames the chinese pole and its universe of a thousand possibilities while continuing in parallel the work as a technician and a blacksmith During the summer of 2014, he immersed himself full-time to improve his pole
technique and at the same moment he meets Violaine Bishop.

From this meeting a duet is born: “On-Off”, a mixture of two artists with paths both very different and very complementary.

Lola’s encounter with circus arts dates back to when she was seven, first  as a sport and artistic activity to expend her boundless energy. As a young exuberant teenager, she joined the Ecole Nationale du Cirque of Châtellerault (2003). Three years later, with her high school degree in the bag, she entered the Ecole Supérieure des Arts du Cirque in Brussels (ESAC, 2006) where she perfected her technique of the swinging trapeze.  Of an explosive and savvy nature, she then went on a one year tour with the Circus Monti (2010) where she took part in 270 performances. Always restless, she then launched the creation of “the girls from the second floor”.

“My name is Anna and when I grow up I want to be a trapeze artist”! That’s what she said to a perfect stranger one day as she walked out of a performance. Circus training, piano and theater lessons harbored her dream of becoming an artist. A little detour at the university in applied languages reminded her that she just didn’t have her feet on the ground! More determined than ever, she joined the Lomme circus prep-school (2206 and then ESAC (2007). Just after graduating, she was the trapeze artist of the show “Sorties 8,9 10” played at La Villette in Paris, as well as in the Halles of Schaerbeck and the Maison de la Culture of Tournai in Belgium.